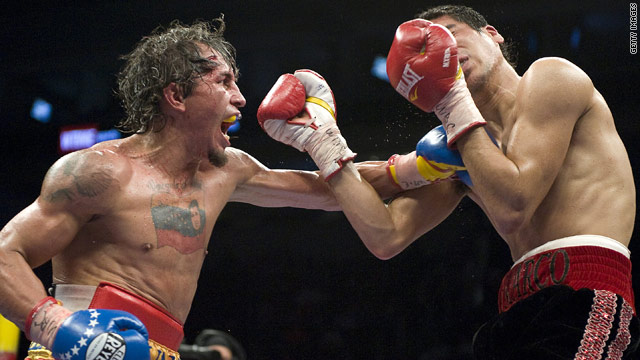 At the Top Rank Gym in Las Vegas, one block west of the neon Strip where boxing superstars are consecrated, Edwin Valero is pummeling another hapless opponent. A cathedral-like hush fell over the gym the moment Valero, the former WBA super featherweight champion, stepped through the ropes. Fighters, trainers and gym rats all watch intently as the Venezuelan buzz saw takes apart his 10th sparring partner in six months.

“We’re having a hell of a time finding guys willing to work with him,” says his head trainer, Ken Adams. “He’s knocked guys out during sparring sessions. And that’s with 16-ounce gloves, head gear, and him holding back.”

Indeed, Valero, a 5-foot-7 southpaw, may be pound-for-pound the hardest-hitting boxer in the world. Yet despite his 24-0 record, with 24 knockouts (you read that correctly: all knockouts), the young fighter has never had a marquee matchup in U.S. In 2004, after a routine MRI revealed head trauma that Valero sustained in a motorcycle accident before he turned pro, the New York State Athletic Commission denied him a fighter’s license. The ruling effectively banned him from fighting in the U.S. and obliged Valero to take to the international circuit, where he headlined fight cards in countries as far-flung as Panama, France and Japan.

Valero has a rare blend of raw power and blazing speed that, under more propitious circumstances, would have made him a pay-per-view sensation. He won his first 18 professional bouts by first-round knockout, terrorizing opponents in the manner of Mike Tyson circa 1985. But fighting abroad kept him off the radar, except among diehard fight fans who have tracked his career on boxing websites and in grainy YouTube fight clips. 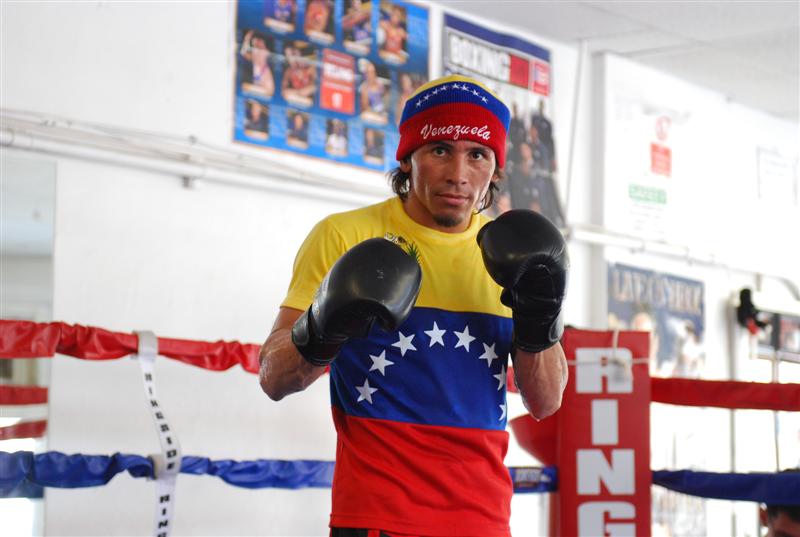 Valero’s life story is as riveting as his ring work. He was born in the mountain hamlet of Bolero Alto, in the Andean state of Mérida, where he shared a tiny two-room house with his father, Domingo, a truck driver; his mother, MaríaEloisa, and four siblings. His parents separated when he was 7, and by age 9 Edwin was splitting time between school and the central bus station in the city of El Vigía, a 40-minute ride away, where he spent afternoons picking and selling fruit to supplement his mother’s meager income as a dishwasher. “I did not have a normal childhood,” says Valero. “It was work, work, work. I gave my mother everything I earned. We had barely enough to eat.”

When he was 13, having dropped out of school, he joined a taekwondo academy across the street from his fruit-selling perch. “The only sport I’d ever played until then was marbles,” Valero says. “There was never time.”

After nine months of training, however, his mother forced him to stop; the monthly dues at the academy cut too deeply into his earnings.

But Valero’s lust for combat had been ignited. Working at a bicycle shop in El Vigía, he learned from its owner about the Gimnasio Francisco Morochito Rodríguez, and when he walked into the facility he knew instantly that he had to become a boxer. “I told my older brother, ‘Edward, we have to box. It’s free!’ and that was it,” says Valero. “I quit work. I quit everything. I moved into the gym that night.”

Without any income, unable to afford the daily bus fare to and from Bolero Alto, Edwin persuaded his mom to let him live at the gym under the supervision of trainer Oscar Ortega. For the next eight years, Valero trained and slept at the gym, which often housed a dozen or more amateur fighters preparing for local and state tournaments.

Valero quickly became a star amateur, winning a national championship at 15, in 1996, and again, twice, in 1998. He compiled a record of 86-6, with 57 knockouts. But outside the ring he was a hotheaded street brawler who demanded respect and emulated the teenage toughs of the barrio he roamed without parental supervision. “From the age of 9, Edwin was always getting into fights at school and in the street,” says his mother. “Some of his friends from around the gym were really bad. They robbed and killed people.”

By Valero’s count he is the only survivor among a group of 30 friends from those years. “They were all killed by the police or their enemies,” he says. “In that world you dealt drugs, stole, or worked as a hit man. Boxing is what saved me. I trained hard and never once used drugs or even smoked a cigarette.”

He trained daily with Ortega, who was at the gym every afternoon for four hours, and he ate his meals at Ortega’s house. Otherwise Edwin was on his own. “I had the keys to the gym, and when there were no tournaments pending, I often slept there alone,” he says. “Nobody was watching me.” He thrusts his hands forward to show a dozen jagged scars on his knuckles. “Look,” he says. “These are all tooth marks. I liked to fight in the streets.”

Brawling and petty thievery earned him 14 stints in jail. But he says he received preferential treatment as a top-tier athlete, and Ortega was always able to spring him within a week.

Until he got in too deep. When Valero was 16 he took to robbing motorcycles from university students at gunpoint. He stashed the bikes in a cobwebbed storage room at the gym, alongside a broken heavy bag. “I thought I’d never get caught,” he says, “but the police were watching me.” Sure enough, he was nabbed leaving the gym with a stolen bike. “I spent the next six months in jail,” Valero says. “If I hadn’t been underage it would have been 15 years.” At one point he learned that someone had put out a contract on him. “But the hit man he hired was a friend of mine,” Valero says, laughing, “so nothing happened.”

Despite the perilous life he led, Valero continued to rise through the amateur ranks. He narrowly missed a trip to the 2000 Olympics when he lost to future IBF featherweight champion Valdemir “Sertão” Pereira of Brazil by five points at the Americas trials final in Argentina. Upon returning to Venezuela, however, Valero found himself at the other end of a pointed gun. “I took the wrong bus from the airport [outside Caracas],” he says. “They took everything: my passport, my money and my silver medal. I cried for two weeks.” But later that year his prospects brightened again when he won at the Central American and Caribbean Games, defeating highly touted Mexican Olympian Francisco Bojado in the finals.

On Feb. 5, 2001 Valero suffered yet another misfortune. Driving a motorcycle without a helmet at 50 miles per hour, he plowed into a car, flipped and landed on his head 20 feet away. He spent 13 days in the hospital, where, he says, doctors told him he could wait six months and the clot would probably go away, or they could operate immediately at take it out. Either way he’d have to abstain from training for three months and from competition for six. He opted for the surgery.

Unable to box, Valero searched for odd jobs in Caracas. In March 2002, penniless, he enlisted in the army, hoping to train in relative comfort in the military’s athletic complex. But a spot at the complex never opened up, and within three months, after two fistfights with fellow soldiers, Valero was dishonorably discharged. “They kicked me out,” says Valero.

He turned pro in 2002 and blazed through his first eight fights, all on Venezuelan soil. One boxing figure who took note was Joe Hernández, trainer of former champions Daniel Ponce de León and Mike Anchondo, who had seen Valero beat his protégé Bojado at the Central American and Caribbean Games. Hernández and Joel De La Hoya, Oscar’s father, invited Valero to Los Angeles, where he won four more fights (to improve to 12-0) and signed with Oscar’s Golden Boy Promotions.

“Valero was known as a hot prospect who knocked out journeymen in activity centers and hotel ballrooms,” says Doug Fischer, editor of the website MaxBoxing.com. “But in Los Angeles he developed into a gym terror, knocking out legitimate contenders and undefeated top-level prospects.”

Valero was crushed when New York State banned him from fighting in January 2004. “I thought my life was over,” he says. But he kept on training in hopes that the ruling would be overturned. It wasn’t. When he fought again, 17 months later, it was far from the limelight, in Argentina.

But Valero piqued the interest of Akihiko Honda, a Toyko-based promoter, who signed him in September 2005.

“We sought the advice of medical experts and commissions,” says Honda, who moved Valero’s training base to Japan. “The doctors all assured us that Edwin is not more at risk than any other fighter.” Within a year Honda had secured Valero a title fight.

Despite the fighter’s perfect record, questions persisted about his stamina (his first 19 bouts lasted a combined 20 rounds), the strength of his chin, and his ability to beat a world-class fighter in the ring rather than the gym. He silenced his critics with a brilliant performance in his 20th bout, in August 2006, winning a brutal, ­action-packed fight against Panama’s Vicente El Loco Mosquera in Panama City to claim the WBA super featherweight title. Valero floored Mosquera twice in the first round, but the Panamanian survived, and two rounds later Valero went down for the first time in his career. He recovered and settled in for a grueling 10-round battle, during which he wore the champion down with a steady barrage of anvil-fisted combinations.

Valero, who turns 27 on Dec. 3, has carved out a tidy little slice of the American Dream far from the violent streets La Vigía. He lives in a rented two-bedroom condo in a tony neighborhood of Las Vegas with his childhood sweetheart,Jennyfer, their two children — Edwin, 6, and Rosselin, 4,–a pit bull and poodle, and he drives around town in a fluorescent yellow Hummer.

He has withstood life’s radical plot twists with a warrior’s resilience. Now, having been granted a fighting license in Texas earlier this year, he can knock again on the door of superstardom. He has moved up to the lightweight division, where he plans to fight Colombia’s Antonio Pitalúa in January. Afterward he will pursue a matchup with megastar Manny Pacquiao of the Philippines or JuanManuel Márquez of Mexico.

When the big moment comes, Valero certainly won’t lack for preparation. He’s been training six days a week since February and is constantly cautioned by his trainers not to overtax himself. “I had to settle him down a bit in the ring, too,” says Adams. “He was moving too much.”

As Valero explains it, “I don’t know how to relax. Even when I am home with my kids on Sundays I have to be moving all the time. I play with them in the pool or walk my dogs up and down the street.” His restlessness is rooted in angst. “There is something inside me that I have to unleash on someone,” he says. “Perhaps it’s anger, hatred I feel at having been denied a childhood.” That might be why Valero bought the house in Bolero Alto where he was born. He might want to recapture something he lost as a child.

In the meantime, his opponents should know this: They fight a man who relishes sanctioned brutality. “I fear no one,” Valero says. “I like to hit men. It liberates me.”♦