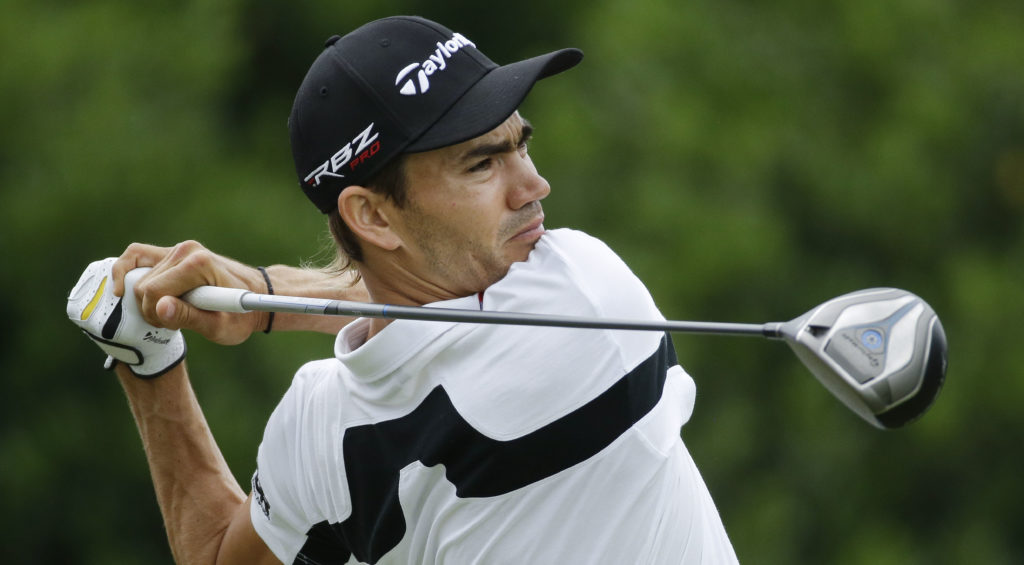 Camilo Villegas, of Colombia, drives on the 17th tee during the third round of the St. Jude Classic golf tournament Sunday, June 8, 2014, in Memphis, Tenn. Villegas made birdie on the hole. Weather delays during the week forced Saturday’s third round to be finished Sunday morning before the final round could begin. (AP Photo/Mark Humphrey)

Camilo Villegas wears a quizzical look as he steps from the scorer’s trailer after the second round of the Shell Houston Open. The PGA Tour rookie has just shot an uninspiring 72 on the Tournament course at the Redstone Golf Club, putting him in danger of missing the cut. Yet charging toward him with lights on and microphones extended come four television crews and a team from a satellite radio station. “I shot even par,” he confesses to one of the reporters, clearly embarrassed by attention so incommensurate with his play. “Hey,” the interviewer shoots back, “you’re a rock star now.” Like the cameras, the exalted status has moved in quickly on Villegas, and the 24-year-old Colombian has been taken by surprise. Five months removed from his only season on the Nationwide tour, Villegas (pronounced Bee-JAY-gas) has become the breakout star of the class of 2006, putting together three top five finishes, including ties for second at the FBR Open and the Ford Championship at Doral–where his final-round duel with Tiger Woods received plenty of airtime–and a tie for third at the Players Championship that left him a stroke short of playing his way into the Masters. During that run Villegas gave golf fans a glimpse of everything he has to offer: the movie-star looks, the ripped biceps, the flashy clothes and the 300-yard drives. What they also saw, over and over again, was the bizarre, arachnid way he crouches to read putts. A strange hybrid of a yoga pose and a push-up, the move has earned Villegas the one thing he was missing: a handle. Now, in his home country, he is known as El Hombre Araña–Spiderman.

Rock star, superhero–choose whichever analogy you prefer. The point is, Villegas’s play and persona have him poised as a crossover attraction ripe for the MTV crowd and the most beautiful people lists. In one key demographic he has already emerged. All week at Doral, Miami’s large Latin American population supplied Villegas with massive galleries, and back home his countrymen flocked to the TV to watch his Sunday tangle with El Tígre in numbers usually reserved for the Colombian national soccer team. Thirty Spanish-speaking journalists showed up for that final round, and the following morning Villegas made the front pages of his homeland’s six largest dailies. Because of El Hombre Araña, Colombian cable channel City TV has signed on to carry the remainder of the 2006 Tour schedule. “Camilo’s impact has been tremendous,” says Manuel de la Rosa, the president of the Federación Colombiana de Golf. “He’s doing for golf here what Juan Pablo Montoya did for Formula One racing, which was establish a tradition and create a huge following.” Amid the jingle of cash registers and the blare of publicity, one question has remained largely unanswered: Who’s the kid beneath the mask?

Camilo and his brother, Manuel, 21, a red shirt sophomore at Florida, from which Camilo graduated in 2004, were born to hard-working, middle-class parents, Fernando and Luz Marina Restrepo. They grew up in Medellín, a city of 2.9 million nestled in the Aburrà valley in Colombia’s mountainous coffee-growing region.”We’re architects,” says Luz. “We’ve done well at times but also had our share of economic difficulties. If it weren’t for our sons’ golf[scholarships], we wouldn’t have been able to send them to a university in the U.S.”

Fernando, an avidsportsman, was Colombia’s 1980 national champion in Trials riding, a form of motocross that requires strength and balance. That explains Camilo’s first love: BMX biking. When he was about six, he and 14 buddies pooled their money and built a track behind the apartment complex where they lived. Endless wheelies and scraped knees resulted, as did a certain fearlessness and self-confidence that Camilo would carry from the dirt track to the fairway.

His first exposureto golf came the same year he built the track, when he walked hand in hand with his father along the nine-hole Club Campestre de Medellín, a hilly course in the middle of the city. Camilo didn’t play that day, but when he finally picked up a club, he showed the kind of determination that would serve him well later on. “Once when I was playing,” Fernando recalls, “Camilo lagged behind in a sand trap and, using a brand-new Ping four-wood he had borrowed from my caddie, he whacked away in the bunker until he had ruined the club.” Intrigued by the sport, the intense little kid began tagging along with Rojelio Gonàlez, the club pro, carrying his towel and water and mimicking his swing.

Under Gonàlez’s tutelage Camilo grew to become a top amateur and traveled the world with Colombia’s junior national team. Then Medellín native Camilo Benedetti, a teammate two years his senior and a member of the golf team at Florida, introduced Villegas to Gators coach Buddy Alexander.

“That was our lucky Colombian connection,” says Alexander. During Villegas’s freshman season, in 2000-01, the two Camilos fueled Florida’s drive to an NCAA championship. Villegas was named first-team All-America and Benedetti made second-team all-SEC. What shocked Alexander about his second Colombian find was Villegas’s six-month transformation from scrawny freshman to buff, hard-driving, team-leading sophomore. “He constantly stayed later and did extra work in the weight room,” says Alexander. “There were times when I had to get him to tone back on the amount that he was lifting.” The coach watched the 5’9″ Villegas pack on 20 pounds, to 160. “When he got here, he looked as if he could become a very good player,” says Alexander.”But it wasn’t until he hit the weight room and got a lot stronger and a lot longer that he became a force.”

Villegas was equally obsessive about other parts of his life. He graduated with a major in business, a 3.78 GPA and was a two-time academic All-America. He still lives in Gainesville, where he shares an apartment with Manuel. “When you walk into his closet, you don’t see any dirty laundry lying on the floor,” Manuel says of his brother. “His pants and shirts are hung neatly in color-coordinated rows, and the hanger hooks are pointed in the same direction.” Camilo, who’s been asked ad nauseam about his compulsiveness, says simply, “Hey, I like to know where my things are.”

Obsessive tendencies can be counter productive in golf. “Camilo is aperfectionist,” says Alexander, who keeps several of Villegas’s meticulously crafted college yardage books in his office to show to young Gators golfers. “That’s a double-edged sword. He can be too hard on himself.” When Villegas walked off the 72nd green after finishing second at February’s FBR, he wasn’t pumped about his best performance ever. Rather, he was disgusted with his putting. Since then there’s been a marked improvement. Before the FBR, Villegas was ranked 144th on Tour in putting average. Today he’s improved to 83rd. “Now I try to be creative and have a nice flow when I get on the green,” Villegas says. If he can get the putter working, there’s no limit for Villegas, as he ranks fourth in driving distance (307.7yards), behind fellow rookie phenoms Bubba Watson (318.5) and J.B. Holmes (310.8), and Tag Ridings (309.2). He is also a skilled shot maker. “Camilohas a short, compact swing,” says Alexander. “He hasn’t had a whole lot of instruction, so [his technique is] not very complicated or technical.”

Like any good superhero, Villegas has a bold Spiderman trait to offset every mild-mannered Peter Parker tic. He may color-coordinate his belt with his shoes in the privacy of his bedroom, but on the course there’s nothing button-down about him. As he puts it, “I like to go at pins.” Some observers feel Villegas could benefit from toning down his aggressive play, but that’s not in his nature.

Villegas goes full-throttle in other ways too. The speed limit on the Gainesville campus is 20 mph, and Villegas would buzz around on his Yamaha Zuma at twice that clip.”He got pulled over on his scooter by the campus police a few times,”Benedetti says. What else? ” Camilo liked to drink hard and have fun.” Villegas exhibited a bit of that attitude and personality as he approached the 8th tee at March’s Honda Classic. An inebriated fan yelled, “Hey, Camilo, you want a cerveza?” “I need two,” Villegas shot back, sending a ripple of laughter through his gallery. “One for my caddie too.”

When he’s back in Colombia, Villegas’s idea of a good time is zapping over to Lake Ayapel, a 40-minute plane ride from Medellín, where he might blast about on a jet ski or help pilot his best friend’s plane, a small two-seater. Jet skis and airplanes are more likely playthings in Colombia than golf clubs. There are only 55 courses nationwide, and the only other Tour-caliber golfer is former BYU standout Eduardo Herrera. Villegas wants to change that. He hopes to become his country’s golf ambassador. But it’s uphill all the way. Public courses are uncommon throughout South America, and in Bogotà, the capital of Colombia, the first public driving range didn’t open until 2004.

Colombia, especially Medellín, is better known as a center of the South American drugtrade. Most of the country’s largest cities, including Medellín and Bogotà,have become markedly safer in the past few years, but it’s still best to stayoff the back-country roads and to fly from region to region. Some of Villegas’s friends drive with handguns in their glove compartments. He doesn’t. “That would invite trouble,” he says. “There are places you need to steer clear of, but it’s the same in some neighborhoods in New York.”

Neither is Villegas afraid to trade off the country’s image. In a new spot for Cobra,which will appear soon, David Feherty asks Villegas how he hits the ball so far. Spoofing the most notorious drug trafficker in cinematic history–Al Pacino in Scarface–Villegas holds up the head of a Speed Series Cobra driver and says, “Say hello to my not-so-little friend.” (Ignore for a moment that Pacino’s character in the movie was Cuban.)

The commercial reinforces how much Villegas has become a symbol of his country. “I know there are a lot of expectations,” he says, “especially in Colombia. But hey, I’m here to have fun and learn. I’m playing against the best players in the world, and I have to be really patient.”

In Houston, Villegas did in fact make the cut and hung around, much to the delight of the many female fans in his gallery, to finish 59th. Like the cameras and the superhero nicknames, such distractions are ever-present now, but Villegas doesn’t seem to be buying into the hype. “Is that going to make me a better golfer?” he asks. “No. Am I going to make a living from that? No. The bottom line is, you have to play good golf.” ♦