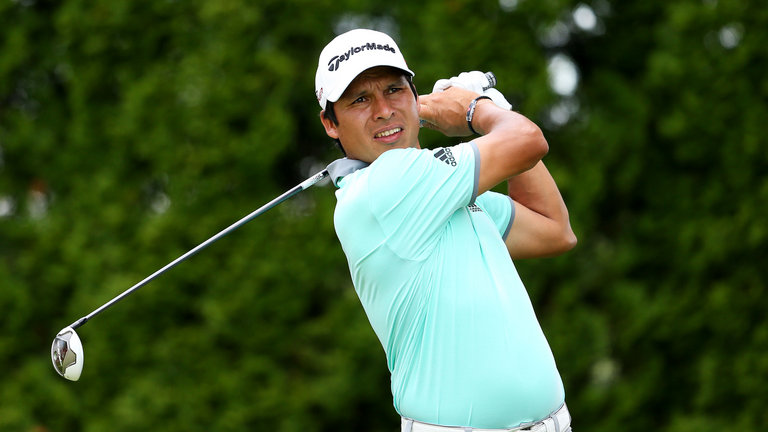 On a midsummer day in 2007, as the young Argentine golfer Andres Romero boarded a hotel elevator in Akron, Ohio, an unexpected passenger trailed him in. “I froze,” says Romero, who just two days earlier had won the European Tour’s Deutsche Bank Players’ Championship, his then-biggest victory. “He congratulated me, but I could barely speak.” Romero stood like a statue at the back of the elevator, too nervous to even press the button for his stop, and rode straight to the top-floor suite. Ding! The doors opened and out strolled Tiger Woods. “See you on Thursday,” Woods said.

Cute story, but it doesn’t end there. Romero and Woods were in town to play the WGC-Bridgestone Invitational  Romero’s fourth-ever PGA Tour start  and, wouldn’t you know it, they were paired together. When the two men shook hands on the first tee, the Argentine was like a giddy teen meeting his favorite pop star. “I wanted to ask him for his autograph,” Romero says. “I couldn’t believe I was going to spend five hours for two straight days walking beside Tiger Woods.”

CUE SWEATY PALMS, shortness of breath and a wicked case of the shanks, right? Not so fast. When Romero slips on his spikes, the nerve-wracked kid in the elevator transforms into a radically different animal, a supremely confident player with a nose for birdies and a knack for saving his best game for the biggest stages. Romero coolly posted a pair of 71s  to Woods’s 68-70  and went on to tie for sixth against one of the strongest fields of the year.

“Romero’s got an aggressive style, which, when he’s on, will take him anywhere,” says Sergio Garcia, a bold shotmaker in his own right. “But what’s most important is that he plays sin miedo.” Without fear. Which helps explain how Romero won just his fourth start as an official PGA Tour rookie, the 2008 Zurich Classic of New Orleans, and how in four of his eight career major appearances he has finished in the top 10 (it took Woods 14 majors to match the same total).

Romero tied for eighth at both the 2006 British Open and 2008 Masters, and he most memorably finished third at the 2007 British, where after scorching the famously taxing Carnoustie for 10 birdies on Sunday, a double-bogey, bogey finish cost him the Claret Jug. At the PGA Championship at Oakland Hills in August he fired a third-round 65, tying the course record on what many consider America’s toughest track. He eventually finished tied for seventh.

“Romero is of the Arnold Palmer-Phil Mickelson mode  always on ‘go,'” says acclaimed instructor Jim McLean, who cites Romero, Anthony Kim and Ryan Moore as the twentysomethings most likely to win multiple majors. Romero sums up his approach to golf like this: “Todo o nada.” All or nothing. Case in point: he missed the cut in his first three starts of 2008 (nada) before shooting 65-68 on the weekend to win in New Orleans (todo). “I go for birdie on every hole,” he says, flashing a big, contagious grin. “That’s the only way I play.”

ROMERO’S go-for-broke style is apt in that he grew up just that  broke. Like his countryman and best amigo on Tour, Angel Cabrera, Romero had a meager upbringing, raised blocks from an elite Argentine country club where he caddied for the privileged few and nursed dreams of golf glory. Still, Romero had something Cabrera didn’t: a big nuclear family. Whereas Cabrera was abandoned by his parents at age 3 and raised by his grandmother, Romero grew up in a crowded home, surrounded by eight siblings and two doting parents.

The clan shared a cramped two-bedroom house that lacked indoor plumbing, on the far corner of Andres’s grandfather’s backyard, in Yerba Buena, a small city on the outskirts of Tucuman in northern Argentina. “Every time we wanted to wash up,” Romero says, laughing, “we all had to go to my grandfather’s house.” To make ends meet, Romero’s father, Federico, transported dirt and construction supplies, while ported mom Rosa cleaned houses for four hours a day to supplement the family income.

Romero was an easygoing, fun-loving kid who rode his bike throughout the barrio and played soccer until dusk. He picked up golf at age 6, when, Rosa recalls, he strode intently up and down an abandoned lot that abutted their property, hitting a golf ball with a club he’d fashioned out of the branch of a Mulberry tree. Says Rosa: “He’d hit the ball for hours and hours, pretending to be his hero, Eduardo ‘El Gato’ Romero.”.

But little Romero’s awe was tempered by a mischievous entrepreneurial streak. Pigu, as Romero is known to his friends (don’t ask  even Romero doesn’t know the origin or meaning of his nickname), and his barrio buddies would filch oranges from neighboring orchards. By age 8 he graduated to more sophisticated criminal behavior at the course where his oldest brother Jose caddied. “Romero would hide at the far end of the club’s driving range,” says his current caddie, Tucuman native Adrian Monteros. “When El Gato hit practice shots, Pigu would sneak out onto the range and swap El Gato’s shiny new balls for his own beat-up ones.”

“That’s absolutely true,” Rosa says. “He was always getting into something.”

But it wasn’t all fun and games. At age 9, Romero was diagnosed with nephritis, or inflammation of the kidney. His doctor told him that if he didn’t adhere to a strict no-sodium diet, Romero might have to rely on dialysis and would never grow strong enough to excel at golf. Romero followed the diet religiously. “That’s when I realized how serious Andres was about becoming a professional golfer,” Rosa says.

Romero turned pro at 16 and played his way onto the Argentine and South American circuits, relying on financing from his brother Jose, who would borrow money from friends and club members. “He’d get a check from one guy on a 30-day loan and cash it with another friend,” Andres recalls. “They were hard times. I had to play well to pay people back. Sometimes, on the road, I’d go to bed early because there was no money for dinner.”

Romero’s prospects brightened when his play caught the attention of Sergio Supertino of SMG International S.A., the Buenos Aires-based golf agency that represents Eduardo Romero. He won twice on the South American tour in 2003 and, fully funded, headed to Europe, where he quickly scaled the ranks, playing well enough on Europe’s Challenge Tour in 2005 to earn a 2006 European Tour card. In 2006 he surged to 35th on the Order of Merit. But it wasn’t until Romero’s stellar play at the 2007 British Open, on the heels of Cabrera’s U.S. Open victory, that it became clear that a second Argentine was vying for a spot among golf’s elite.

WHEN Romero smiles, his dark eyes dance gleefully. It makes you wonder if you’ve missed something, like an inside joke. But it also captures his ever-upbeat spirit. After his disheartening loss at Carnoustie, the Argentine did not brood or grit his teeth in the press tent. Instead, he flashed that impish grin  and even laughed  when a reporter compared his late-round meltdown to Jean Van de Velde’s infamous 1999 collapse. And talk about moxie: one week later Romero thrashed his way to a three-stroke victory at the Deutsche Bank Players’ Championship, his first career win on a major golf tour.

As assured and carefree as Romero appears today, he’s still processing his meteoric metamorphosis from caddie to the world’s 27th-ranked golfer. “It’s hard to believe sometimes,” he says. “But I know where I came from and how hard it was getting here. I’ve been a hardworking pro for 11 years.”

Flush with the success of his fairy-tale 2007 season on the European Tour, Romero arrived in America in February and missed his first three cuts. By mid-March he was concerned enough to consult Mariano Bartolome, the Argentine swing instructor who coaches Cabrera. “We worked on Andres’s swing path and his right-hand grip, which was a bit weak,” Bartolome says. “I wanted to get him to use his fingers more and his palm less. Andres has a very fluid, natural swing, which we didn’t want to tamper with. He was just inside out. I had him do a lot of drills to get his path back online.” The week after his sessions with Bartolome at Doral, Romero won the Zurich Classic. Two weeks later he finished tied for eighth at the Masters.

Romero blames his slow start this year on a lack of focus. “At the end of last season I took an extended vacation in Tucuman,” he says. “It was one three-month-long party. Golf wasn’t really on my mind.” There was also the matter of adjusting to the individualist lifestyle on PGA Tour. “It’s 100 percent different here,” he says. “I go to bed early every night and rarely drink or party. And I’m on the golf course all day. In Europe, all the Argentines would hang out together in the same hotels.” Adds Cabrera: “In Europe there were always eight to 10 of us together. Camaraderie is extremely important to us.”

Cabrera and Romero combat loneliness by sticking together whenever their tournament schedules coincide. They dine together and pair up for practice rounds, and the veteran has had a big impact on the rookie. Romero says Cabrera was particularly helpful at the ’07 British. “We walked the course together,” Romero says, “and he gave me a lot of tips.”

And, like Cabrera, Romero makes frequent trips home to spend time with his family and friends. Back in Tucuman he has lunch at his mom’s every day. But he also cuts loose. “I like to go crazy,” he says. “I cruise the city in my truck [a red Dodge pickup he’s outfitted with 14 speakers] and go out to dinner with my friends every night. We go dancing at my buddy’s nightclub every Friday, Saturday and Sunday night and end up partying back at my place.”

Things have changed dramatically for Romero in Tucuman. He now owns his own home a few blocks from his parents’ place and a five-minute walk from the golf course. Space and indoor plumbing are no longer an issue. He’s renovating his house and merging it with the house next door. “I have five bedrooms, and six bathrooms all to myself,” he says. “Como cambia la vida.